Here's another from my archive. This tree called out to me as I was swimming through a gorgeous kloof in the Garden Route. The light was such that it didn't make for an exceptional photograph, but the composition and the concept both really appealed to me, so I took the photo with the intention of working something out of it. I've worked on it somewhat before now, but never quite achieved its potential. Recently I've needed some distracting stress-release while also feeling the urge to achieve something reasonably tangible, so I decided to dig around in my 'photo-sketches' for something to turn into a finished work.

I hope you enjoy looking at this one as much as I have been. I initially titled this photo The Third Half, Between a Rock and a Hard Place, but maybe it's about a tiny Rememberry Tree squeezed between the Twin Cliffs of Forgetfulness and Distraction, and when the River of Emotion runs calm (if dark) at its roots, it can see the reflection of its invisible rememberries and get on with what it Really Wanted To Do. 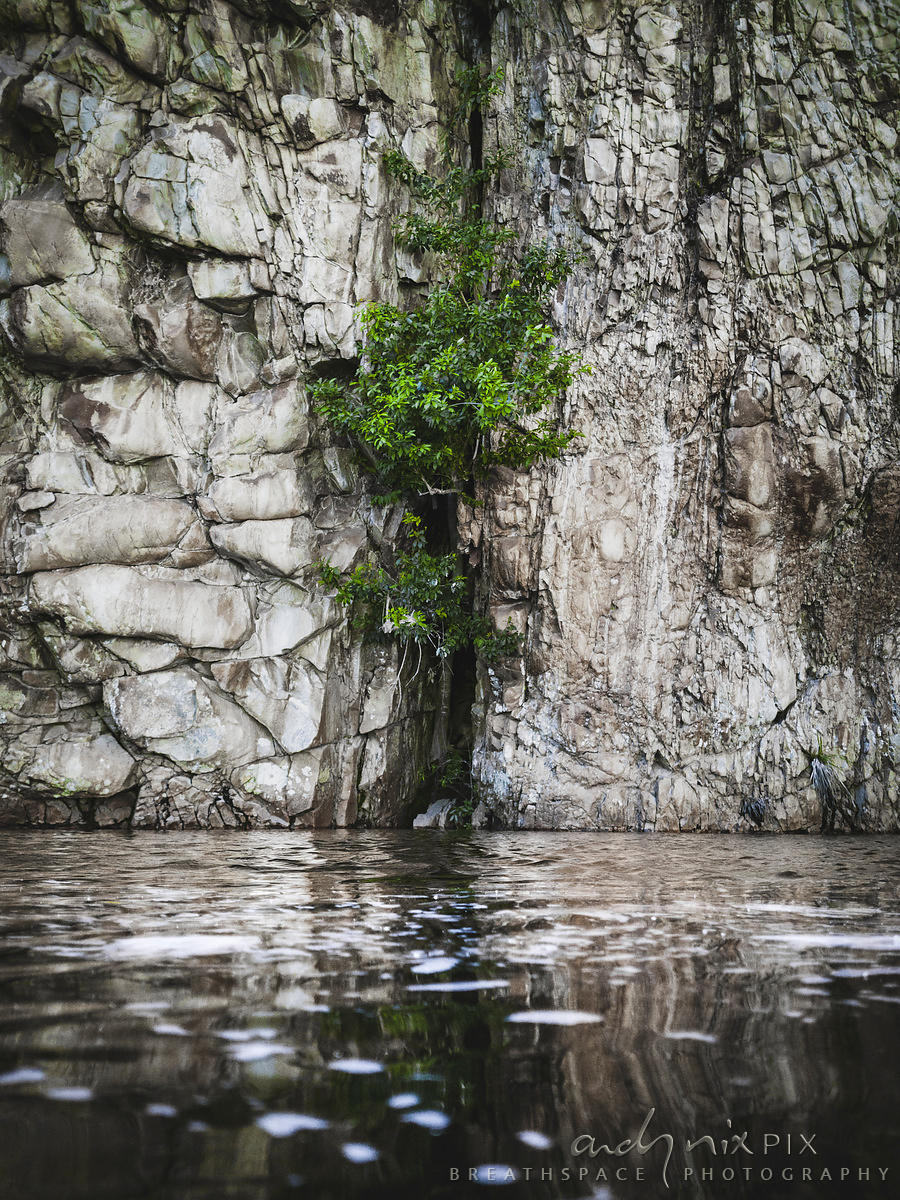 In working on this photograph, looking at how different the finished work is from the raw, unedited, photograph, I was reminded of a few judgements that I've received on my artwork created with digital tools that run along the lines of "It's beautiful, but it's been worked on/edited/photoshoped" — that contemptuous "but" implying that any work I perform on a photograph after clicking the shutter renders it a phony rather than a photo.

“If we limit our vision to the real world, we will forever be fighting on the minus side of things, working only to make our photographs equal to what we see out there, but no better.” 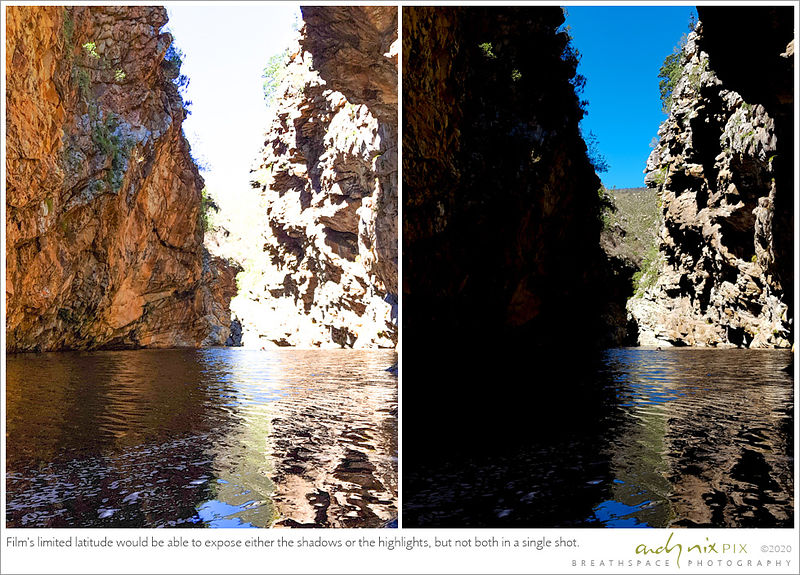 This is the kloof the tree lives in. Film’s limited latitude would only have been able to expose either the shadows or the highlights, but not both in a single shot.

"The negative is the equivalent of the composer’s score, and the print the performance."

Translating Ansell's music analogy into digital terms, the camera's RAW file (the digital negative) is the equivalent of the composer's score, while the processing of the RAW file (digital developing) is the performance of the piece, and the print is the recording.

People accept musicians playing on digital instruments to create their art and using digital techniques in the recording studio to achieve their creative vision. These same people also agree that music generated automatically by a computer algorithm is not genuine art. Yet for some reason people sometimes have the opposite view of photography: an outdated idea that working on a photograph after clicking the shutter is somehow cheating. However, the raw binary data of every single digital photograph — regardless of whether it's made with a high-end camera or a cheapie cell phone — needs to be converted to a visual image by software, either automatically by the camera's pre-programmed algorithms or at the photographer's discretion using digital tools.

So to use Ansel's music analogy again, an "uncheated" digital photograph direct from camera is the equivalent of a composer's score automatically interpreted and played by a computer. Quite frankly, I prefer my art, aural or visual, to be created by a human artist, whether their tools are analogue or digital. 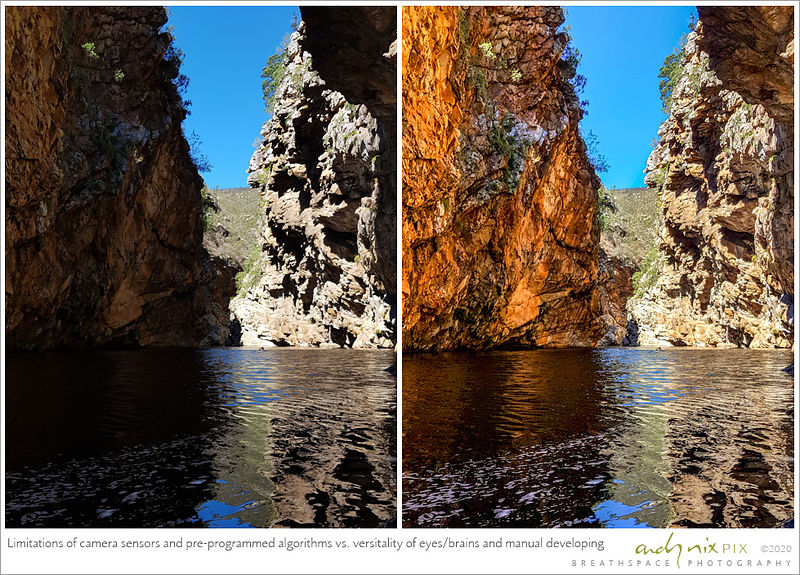 A digital camera can record a far greater tonal range in a single shot, more than our eyes in fact, so the digital information will always need to be selectively represented. The picture on the left is processed by pre-programmed algorithms in the camera which, unless your eyes have contrast sensitivity, is not how our eyes and minds perceive the actual view. The picture on the right more accurately portrays the versatility of our eye-brain perception — through selective manual developing/editing.

Fundamentally, light is what photography is really about. After all, it's basically just recording the pattern of photons bouncing off a surface: originally it was silver particles on copper plates and now it's silicone in digital sensor arrays. My favourite inspirational photographer from the film era, Galen Rowell, said that if you have bad light, you'll have a bad photograph, but if you have good light, you might have a good photo. The latter is still true today: good light is not enough to make up for a poor composition or an unskilled photographer. However, with the creative possibilities expanded by digital tools, you may still get a good photograph despite poor light.

When I spied this tree flourishing out of a narrow crack in an awe-inspiring kloof cliff face in the Garden Route, I immediately saw the potential for a good photograph. I loved the metaphorical concept as well as the composition, however the light was pretty crap, photogenically speaking. If I had still been using slide film, I would probably have enjoyed the scene in my mind before sighing and continuing my swim without taking a photo. But digital photography is a multi-stage process much like developing a number of sketches into a finished painting, so I perched on a very conveniently placed if rather uncomfortably pointed rock in the middle of the deep stream, lowered my Camsung's lens just above the surface of the water, contorting my body so I could actually see my compositon, and clicked. (To the amusement of my companions, since I was swimming — and therefore photographing — in the buff; I think this fact alone should increase the value of the final print!) 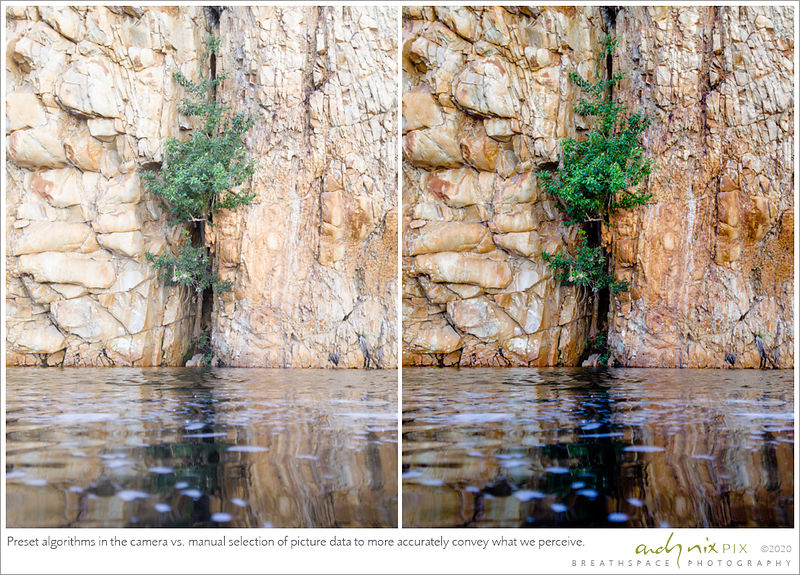 Preset algorithms are programmed to expose photographs in a mid-tone, so scenes in shadows are often overexposed and too light, while scenes in bright sun, like snow or the beach, are underexposed. The picture on the left is automatically interpreted while the picture on the right, more accurately conveying what we perceive, is manually edited (for accuracy rather than creative expression).

I often wonder what Galen Rowell would have said about digital photography. I'll leave you with this thought from him, as well as a recommendation to enjoy a browse through his photos and, if you're a keen photographer, to read his writings too: of all the words I've read about creating good photography, Galen's were the most valuable.

“I think that cognitive scientists would support the view that our visual system does not directly represent what is out there in the world and that our brain constructs a lot of the imagery that we believe we are seeing.” 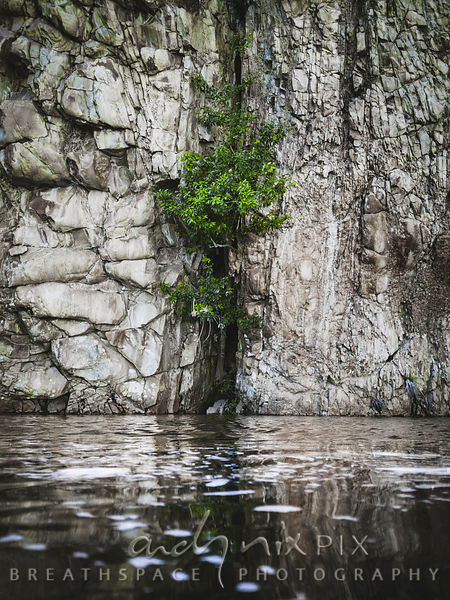 The Third Half, Between a Rock and a Hard Place